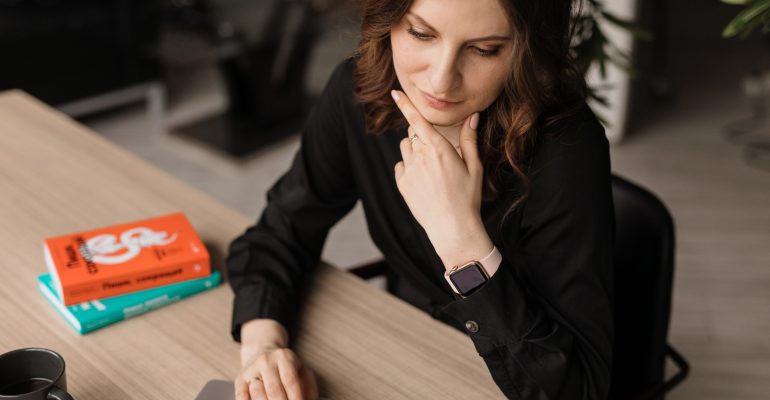 How to Write Killer Commercial Scripts

The average American consumer comes into contacts with thousands of ads every day,  making it more and more difficult for brands to stand out from the competition.

Far too often, TV and radio commercials rely on generic, worn-out tropes that don’t do enough to catch the audience’s attention.

In this article, we’ll take a look at some of the best strategies for writing effective commercial scripts that will resonate with new audiences and help you grow your brand.

While every organization is different, these tactics can help any organization optimize their commercials and achieve their marketing goals.

Start from a Clear Message 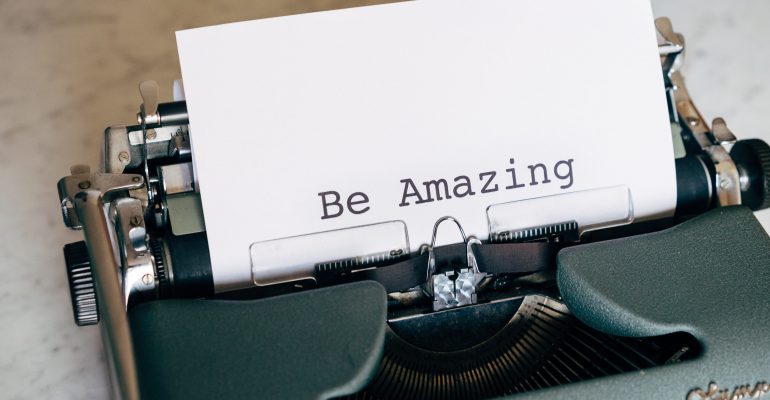 In the short time allotted for a video or audio ad, you need to find a way to communicate a message that your audience will remember.

While you may leave space for other details, the core brand message should be front and center in every commercial you write.

If you’re running an ad for Black Friday sales, for example, you’ll need to include the discounts and any notable products that are on sale.

With that being said, you’re still primarily selling your brand rather than the promotion itself.

Customers are constantly receiving messages about new sales, so the important thing is to get them interested in your specific brand message.

By the end of the ad, your viewers or listeners should come away with a clear idea of your brand’s mission and values.

The actual message doesn’t necessarily need to be explicitly written into the script—it can often come out without being stated directly, but it still needs to play a central role in the writing process.

Esurance, for example, made a big advertising splash by hiring The Office star John Krasinki for their commercial voice overs.

They leveraged his existing reputation and persona to lend their brand more credibility, and it aligned perfectly with their core messages.

The script is written in a simple, casual tone that fits his character and makes it easy to highlight the key benefits of Esurance in a limited word count.

While not all brands can hire celebrity voice actors, this example demonstrates the importance of matching your script and voice actors to your brand’s overall message. 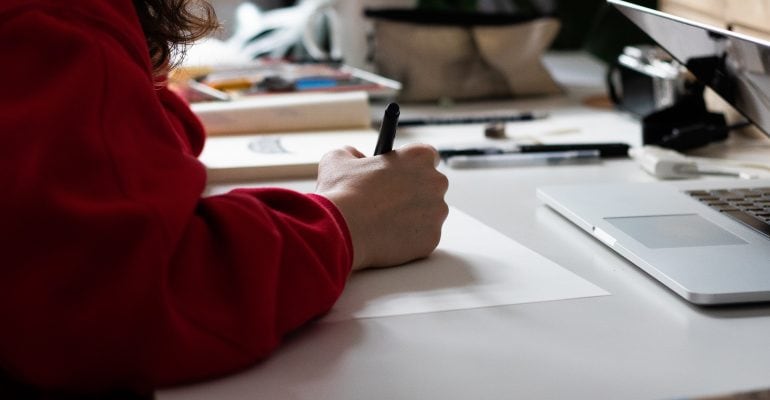 It’s obviously important for marketers to add some creativity and flair to the final product, but commercial scripts are also time-limited and need to maintain a clear focus on the main point throughout the ad.

This is especially true in 2020, with short-form ads disrupting traditional marketing practices and showing incredible promise when targeting mobile users.

While there’s often a temptation to expand on each topic and add to the basic message, this level of depth simply isn’t achievable in the average TV, online, or radio commercial.

Customers will have the opportunity to learn more about your brand if they choose to engage—the ad itself should be quick and concise, and your voice actors should be able to read the script at a comfortable pace within the time limit.

Of course, it’s hard to say how long your ad will last until you actually record yourself reading the script.

While there are general guidelines for the rough word count of ads in various time slots, these are only estimates and can vary based on pacing.

Just because your voice actor can make it through a script within the allotted time doesn’t mean you should try to fit as many words as possible.

As demonstrated above, a leisurely pace is often crucial to the tone of a given commercial, and you shouldn’t expect your audience to absorb much information in a single ad.

Some of the most effective ads use almost no words at all—less is often more when it comes to writing commercials.

The famous “No Words” NHL commercial from 2010 illustrates the impossibility of using words to describe certain emotions. 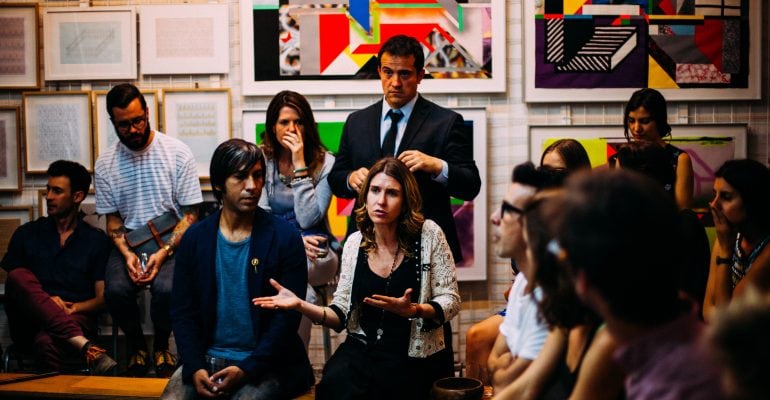 Most of your viewers or listeners will be relatively cold leads who don’t have much information about your brand.

Since commercial content only travels in one direction, it’s important for your ads to provide the information they need to get more interested in your brand. The easiest way to identify the right information is simply to consider what a prospective lead might be interested in.

To start, you’ll obviously want to communicate basic facts such as the product or service you offer, the advantages of your products or services compared to the competition, and any specific call to action such as a new product or a special promo code.

Once an audience member has those data points, they’ll be ready to move on to the next stage of the customer journey.

In general, your first goal should be identifying what you want viewers and listeners to come away with after watching your ad.

Once you have that information, you can write a more focused commercial that makes the most of a small period of time.

You should have clear takeaways in mind before you start writing the script.

The example below illustrates how building a commercial around anticipated questions and concerns can make it easier to keep the ad concise.

In just a few seconds, the ad highlights one of YouTube Premium’s key features—the ability to keep videos and music playing outside of the YouTube app.

This provides a perfect answer to the question “why should I switch to YouTube Premium” without spending too much time on the details.

Amanda, the voice actor in the YouTube Premium commercial, has been performing voice overs for more than ten years.

She’s one of countless professionals of the Voice Crafters team with the experience and equipment necessary to provide a professional final product.

Commercials don’t always have to be funny 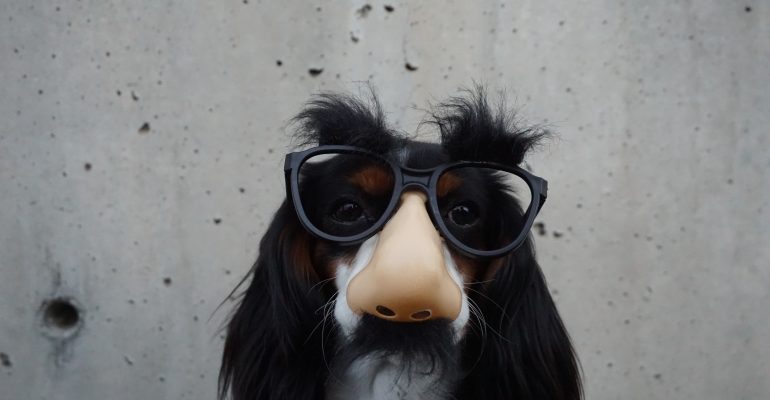 We’ve all seen some surprisingly clever commercials at one time or another, but ads that try to be funny don’t always come off as intended.

While humor can be incredibly effective in advertising, it can also become a crutch that marketers rely on when they don’t have any better ideas.

Think about it—for every funny ad you see that’s genuinely well-written, there are dozens more that fall flat or land closer to awkward than humorous.

Of course, that isn’t to say that writing a funny commercial is always a bad idea, but you should also consider exploring other tones.

Keep in mind that an ad can have a handful of jokes or puns without being too reliant on humor.

Overwriting is one of the most common mistakes in video and radio ads, and it’s more likely to turn viewers and listeners away than it is to actually attract their interest.

You don’t need any incredible jokes or cutting-edge effects to generate interest in your newest commercial.

The Quizno’s rat commercial is one of the best-known examples of an ad that tries to be funny but miserably falls flat.

Again, humor can be effective when used in the right ways, but it can also be boring or even grating when used in poor taste.

Run a table read in advance

Writing a script down on paper is one thing, but hearing how it sounds out loud is another.

Far too often, marketers assume their script is golden because it reads well silently—even if they haven’t experienced it the way it will be shown to potential leads.

Before making a final recording, it’s critical to go through at least one table read and see how the script flows when it’s being delivered by a real voice actor.

Just like the process of proofreading by reading aloud, this will help you notice any awkward moments or pauses that could hurt the ad’s pacing.

Along with dialogue and voice overs, keep in mind that your script needs to include other types of directions including set changes, wardrobe changes, shot changes, and notes for music and other sound effects.

Every word and every visual detail should be thoroughly scripted out and rehearsed before you begin the process of recording your commercial.

Focus on How You can Help your Customers 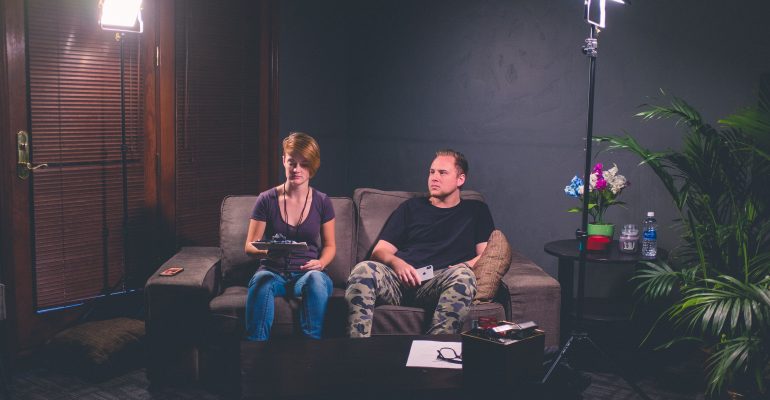 Another common mistake in both TV and radio ads is to spend too much time focusing on the brand itself rather than how it relates to the leads who are watching or listening to the commercial.

As a script writer, it’s crucial to recognize the distinction between features and benefits and how that distinction should play into your writing.

The average user, for example, isn’t likely to understand the difference between a computer with 8 GB of RAM and another model with 16.

While they might recognize that one is twice as high as the other, that doesn’t mean anything if you can’t explain how it will improve their experience using the device.

With that in mind, a computer manufacturer might show side by side video of two different models loading rather than simply explaining the difference in their construction.

If you can bring loading times in a new game down from 20 seconds to 5 seconds, that’s going to be more meaningful to your audience than the computer’s raw horsepower or its technical specifications.

It’s usually much easier to focus on product benefits than product features, especially in a short commercial.

Rather than starting from what you think the best parts of your product or service are, start from what those elements can offer to the typical customer.

In other words, you want to market to the desires of your customers rather than marketing based on technical achievements or other types of information that may not mean as much to the average lead.

The Sennheiser commercial below is an outstanding example of covering features in relation to their associated benefits.

For example, it explains that the “triple microphone array” leads to “excellent speech clarity” rather than simply highlighting the array itself.

The ad also covers a number of additional perks including noise cancellation, touchpad controls, and a smart pause option.

These details underline the reasons to switch to the Sennheiser PXC 550-II, and the sleek shots of the headphones themselves match the brand’s luxury image.

Writing commercial scripts is more complicated than it sounds.

Effective video and audio advertising depends on expertise at every step of the production process, from professional script writers to talented editors and engaging voice actors.

These tips will help you optimize your approach and craft ads that resonate with your target audience.